Now that we’re a few weeks into 2018, we wanted to reflect on Abelard’s first one-act play festival that took place in the middle of December. Students in our Drama class have been working hard on smaller dramatic projects all year, but in our classroom we’re always short one pivotal element of the theatrical event: an audience!

To practice working in front of a crowd, and to get the feel of staging a complete play, the class curated a selection of very short plays. Each play was only ten minutes long and featured a small cast of only two or three performers. Like short stories, ten-minute-plays tend to pack a real dramatic punch because they condense so much narrative into such a small package. Thanks to the short run-times and small cast sizes, we were able to perform each play six times.

The turnout was great, particularly given that it was a cold night. Audiences got to choose their own path and see as few or as many shows as they liked, in whichever order suited them best. Our evening included an intimate domestic drama, absurdist takes on the theatre business, a vision of the afterlife, a comedy about when life doesn’t work out how you’d like, and even a new take on Romeo and Juliet. The night was such a success that we’ll almost certainly repeat the experiment next year – hope to see you there! 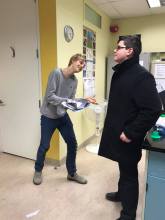